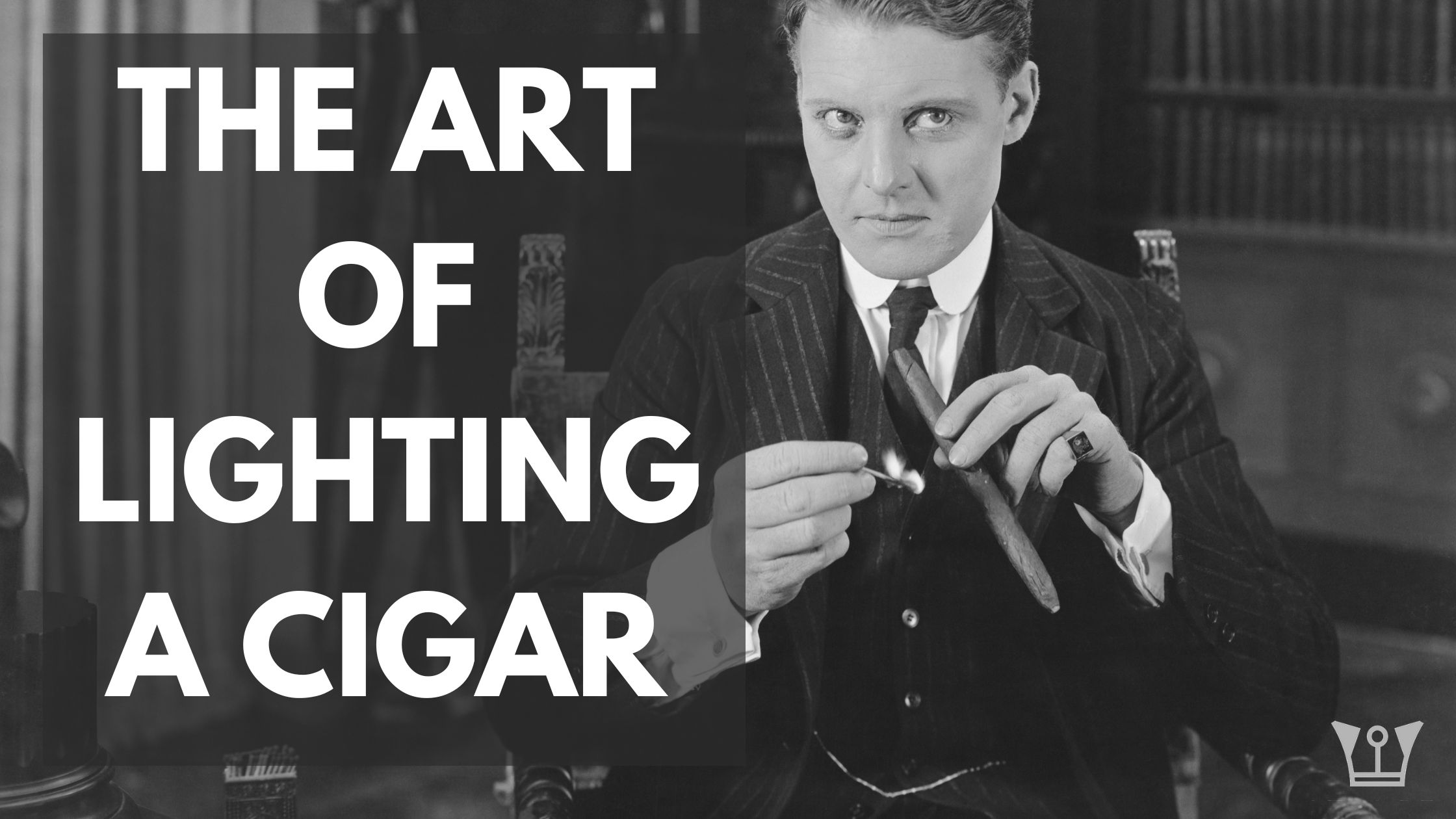 Cigars are crafted with care and attention, and you should light them the same way. Lighting your cigar in a rushed manner or with a bad lighter is disrespecting the integrity of the cigar. So to ensure you treat your cigars right, this article will discuss the steps to preparing, lighting, and smoking your cigar.

With this guide, you’ll smoke your cigars like a pro who’s been doing it forever. Do not bumble your way through this process when we have the steps laid out for you in detail below!

How to Properly Smoke a Cigar

Smoking and lighting a cigar is a true art form. But people have many questions when first starting, like which end of the cigar do you light and how do you properly ash a cigar. Keep reading for a detailed guide on preparing, lighting, and enjoying a cigar.

Before lighting a cigar, you must remove it from the plastic wrapper. Remove the cigar wrapper for a few days or even years if you have a great cigar humidor before you are ready to smoke the cigar. Removing the wrapper ahead of time will allow the air to season the cigar, so it is plump, fresh, and flavorful when it’s time to smoke it.

Once your cigar is free of the plastic wrapper, it’s time to cut or punch the cigar. This action opens one side of the cigar, so you have somewhere to light it and pull air through to nurture the flame. There are two sides of a cigar: the head and the foot.

The foot is the end of the cigar you light and is usually flat and farther from the label. The head is where the cap is. You use a cigar cutter to cut off the cap and smoke through it. It is usually just an inch or two away from the label.

To prepare the cigar for smoking, you will need to punch or cut the cap off of the head.

Now that you’ve prepared your cigar, it’s time to light it! Use a butane lighter or a very long match. Do not use candles, BBQ lighters, cigarette lighters, or tiny matches, as they will not light the cigar properly, and you risk burning yourself.

Before you put the cigar in your mouth, gently warm the foot with your lighter as you spin the cigar around slowly. Don’t directly put the foot into the flame, but hover above it for this step.

Now, place the head of the cigar in your mouth. Hold the lighter in front of the foot of the cigar, still not touching the flame. Now pull air through the cigar, so you pull the flame toward the foot, lighting the end. Now slowly puff on it until the end is fully lit and continues burning on its own.

Gently blow on the foot of the cigar to nurture the flame, so it burns all the way around. This step is optional, but most people prefer to do it.

Now for the best part: it’s time to smoke the cigar! Remember, you inhale cigars to draw the smoke into your mouth, but you should not inhale the smoke into your lungs the way you would with a cigarette or rolled marijuana. The smoke should billow in your mouth for flavor, and then you blow it out a few seconds after.

You should hit the cigar and rotate it about once a minute to keep it evenly burning. When you are not actively smoking the cigar, allow it to rest in an ashtray with the foot suspended in the air.

Do not ash the cigar after every drag the way you would with a cigarette. Instead, gently roll the ash off into an ashtray. Do not flick it or tap it, as this can compromise the cigar. Let about an inch or so of ash build up before discarding it.

When you finish your cigar, make sure you extinguish it completely by rubbing it out in an ashtray. If a significant amount of the cigar is left, gently rub out the light so you don’t squish or break the remaining part of the cigar, which you can come back to and enjoy in the next 24 hours.

There are a few different types of lighters in the world. Most serious cigar smokers will not light a nice cigar with a normal butane Bic lighter or a weak little match. So let’s talk about a few different kinds of lighters people use to spark cigars. They can have more of an effect on your cigar smoking experience than you may think.

We want to preface this section with this: always use butane lighters when lighting a cigar. Do not use an electric lighter or any other kind; butane is the way to go.

A pipe tobacco lighter has a gentle flame, as some people like to puff and gradually start their cigar. These lighters got their name because the flame projects from the side of the lighter rather than the top. This design makes it easier to light pipes from above or light cigars in a circular motion, so they burn evenly.

Jet flame lighters are powerful and have a far reach with their flame. They have an inner flame that you can see and an outer flame that’s invisible to the naked eye. This outer flame allows you to wholly light the end of the cigar to prevent an uneven burn.

But because they are more powerful, you have to be careful you light the end and not further down the cigar’s foot. Jet flame lighters can have more than one flame and sometimes up to three, making the burn even more intense.

Butane torch flame lighters are often wind-resistant and or windproof, so you can light your cigar even when the wind is fighting with you. Like jet flames, torch lighters can have one, two, or three flames to help you light the cigar.

Unlike the powerful jet flame lights, torch flames have a more precise flame, so you have more control when lighting the cigar. These lighters are ideal for fixing an unevenly lit cigar or one that is not burning well.

If you’re in the market for a new lighter, consider one of these top lighters for cigars. They’re specially designed to light cigars and will perform excellently.

You may not realize it, but a high-quality lighter made for cigars will significantly enhance your smoking experience and ensure you get the most out of every cigar you enjoy. There are a few types of lighters that cigar smokers love, so check out our list of best lighters.

From how you store your cigars to how you light them, every little thing contributes to your overall cigar enjoyment. The more care you take in preparing the cigar and carefully lighting it, the better it will be when you smoke it.

For more information on lighting a cigar, read the questions and answers below.

Should I remove the cigar’s label?

Removing the label from the cigar before smoking it is a matter of preference. Some people like to remove it for aesthetics or to slightly loosen the tobacco in the cigar. Other people prefer to leave it on for aesthetics too, and it keeps the cigar wrapped tighter so it won’t fall apart. But a good cigar should never fall apart while smoking anyway.

It is common to leave the label on for the first few minutes of smoking. The heat from the cigar smoke will loosen the adhesive so you can easily peel it off without damaging the wrapper.

Is it better to cut or punch the cigar?

This decision is also a matter of preference. If you want a smoother, longer burn, you should punch the cigar because it leaves the wrapper’s shoulder on the cigar, creating a more internal burn. If you want a more intense burn that may be a bit faster but offers large pulls of cigar smoke, you should cut your cigar. Try doing both methods with different cigars to determine which way you like better.