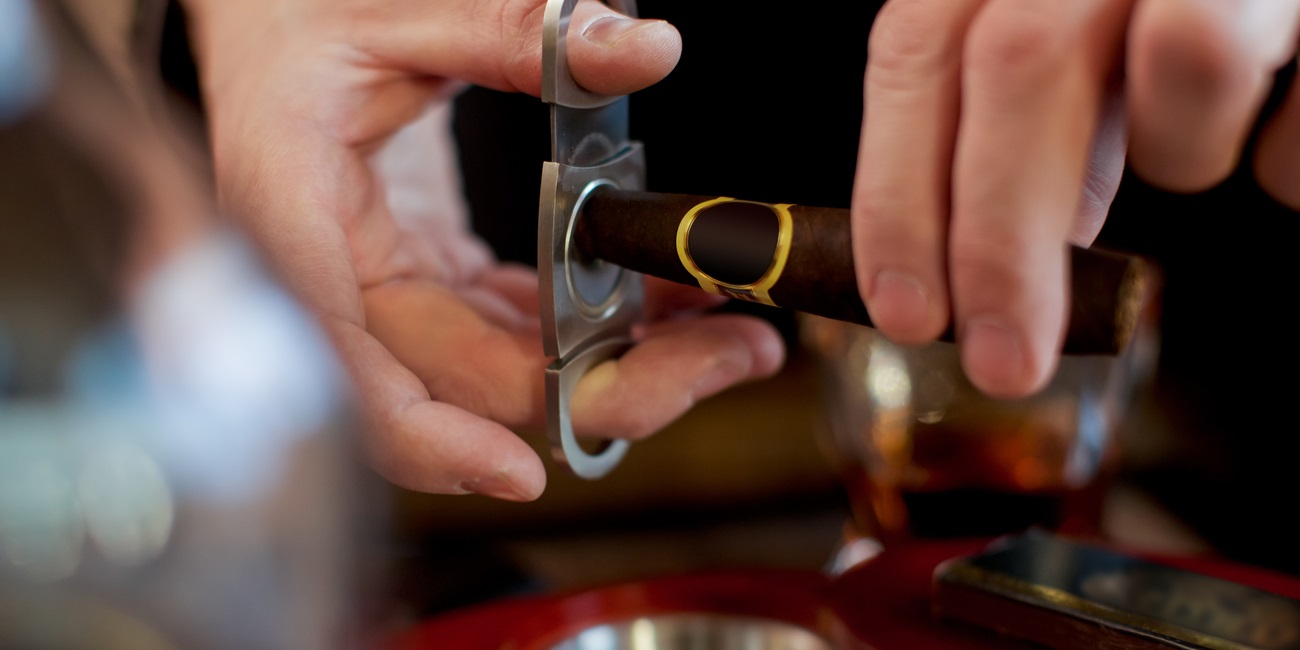 There is more to enjoying a cigar than just lighting up and puffing on it. Every cigar enthusiast puts effort into the storage and preparation of every cigar they smoke. A major part of preparing a cigar is to clip the end, allowing smoke to come through the cigar when you pull on it.

A good cigar cut can make all the difference in your smoking experience. And a poor cut can destroy a perfectly good cigar before you ever taste it. Read this article to learn the ins and outs of cutting a cigar, whether you’re a frequent cigar smoker or not, so you can have a clean cut every time.

Why You Need to Cut Your Cigar

You can’t smoke a cigar unless you cut it. The cigar cap will block the passage of smoke, making it impossible to enjoy. To smoke a cigar, the cap must come off to create a passage for the air to come through.

Cutting the cigar properly will ensure you don’t damage or destroy the wrapper leaf. If you cut the cigar and ruin the wrapper leaf, the cigar may fall apart completely. To avoid this, you should know the right way to clip and cut a cigar for a smooth opening that offers plenty of smoke when you pull.

Tools for Cutting a Cigar

When you need to cut a cigar, you should use a cigar cutter. If you don’t have one, there are other options. Below are the most common tools used to straight cut a cigar:

Which End of the Cigar To Cut

Cigars have two ends: the foot and the head. You want to cut the head of the cigar, and you want to light the foot. The head is where the cigar cap is, which you must remove before you smoke.

It’s usually easy to tell which side to cut, as the foot should have a flat cut already, while the cap is closed and rounded. The cigar’s label should be closer to the head of the cigar. In summary, to smoke a cigar you cut the cap off the cigar head, put it in your mouth, and light the foot.

Where To Cut a Cigar

Cigar cutting is an art. You have to cut the cap off at the right spot. If you cut it too high, the cigar will be tight and difficult to pull. If you cut the cigar too low, you may compromise the wrapper, the flavor, and the overall smoking experience. Cutting too low can completely ruin the cigar if you’re not careful.

Experts say you should cut your cigar 1/16th of an inch below the cap. This is about 1/10 of a centimeter, so it is quite a small portion of the cigar you should be cutting off.

While you should always aim for your first cut to be a perfect cut, it’s better to cut too little than to cut too much on your first try. You can always chop off a little bit more.

How To Clip a Cigar

There are a few different ways to clip a cigar. If you have a cigar cutter, you should use it! But in case you don’t, we’ve explained other ways that you can remove the cap properly.

The best way to get a clean cut with a cigar is with a cigar cutter. Cigar cutters are small metal devices made to chop the caps off cigars in a clean, smooth motion. These portable, handheld tools have an opening where you can insert your cigar. Then, in one swift motion, squeeze the blade so it cuts off the cap. These are precise and easy to use, so they’re the best option. If you smoke cigars often, that is well worth the investment.

If you don’t have a cigar cutter, you can use a knife. We recommend using a sharp, small knife. Do not use any serrated blades or super large kitchen knives, as this can ruin the wrapper, and you could hurt yourself. Place the sharpest part of the blade just below the top of the cap. Twist the cigar, following the direction of the wrapper. Once the cap is mostly detached, you can gently tear it off and discard the cap.

Another option when using a knife is to place the cigar on a surface and slice off the cap, like slicing a loaf of bread. The first method will result in a smoother cut but takes more finesse to accomplish.

Cutting a cigar with your fingernails works the same as using a knife. Rotate the cigar following the direction of leaves on the wrapper. Puncture just below the cap with your thumbnail and slowly work your way around the head of the cigar. Move your nail around until the cap detaches from the cigar head.

Using your teeth to cut your cigar results in a rough cut. But if you don’t have a cutter, knife, or long enough fingernails, this may be your only option. Place the cap between your teeth and bite down hard until the cap detaches. Do not tear or pull away, as this could destroy the cigar wrapper.

Now you can feel confident when cutting a cigar in front of your buddies. Please remember cigar cutters are by far the best option. Knives are a great option if you find yourself without a cutter. But fingernails and teeth should be your last resort, as it is more difficult doing it this way and can go wrong easily.

Every time you cut a cigar, do so with care and attention. As the title suggests, cutting a cigar is an art form. Take your time with it. The more you do it, the more confident you will become in your cutting skills, so don’t shy away from the task. Cigar smoking has a certain etiquette to it, and cutting is a large part of that.

For more information on cutting and preparing your cigar for smoking, check out these frequently asked questions.

What is punching a cigar?

Punching a cigar is different than cutting a cigar. Punching a cigar leaves a shoulder of the cap intact on the head of the cigar. But cutting removes this shoulder. Some cigar smokers enjoy a deeper, harder pull, which punchers offer.

Is cutting better than punching?

Neither method for preparing your cigar is better than the other. Cutters offer a complete and smooth pull on the smoke while punching a cigar with a cigar punch cutter will have a tighter feel when you pull. It comes down to the preference of the smoker. Try both and see which you like better!

Is cutting different from clipping?

No! Cutting and clipping mean the same thing when preparing a cigar. Cigar clippers and cigar cutters are the same, but cigar punchers are different.