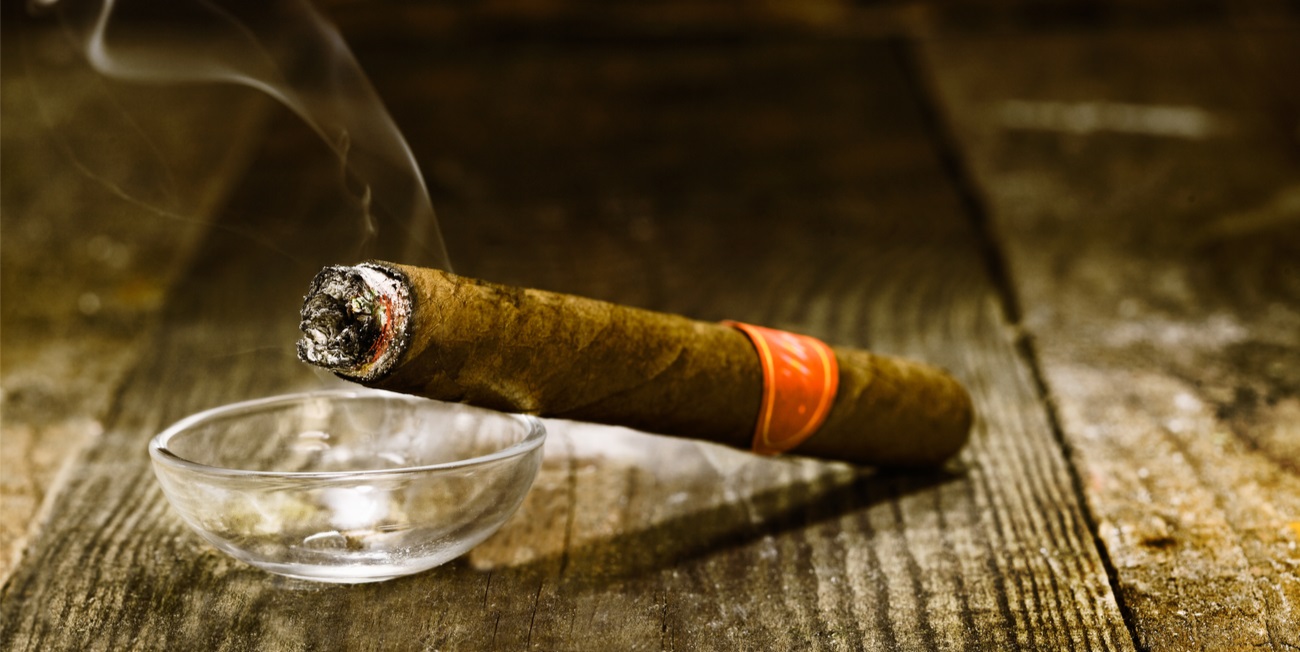 If you want to learn how to put out a cigar for later, consider this your complete guide of the proper way to do it and the worst ways to go about it. Like cutting or lighting a cigar, there is a wrong way and a right way to do it.

Keep reading to learn the correct way to snuff a cigar and save it for later so you can enjoy the entire cigar even if life gets in the way of your smoking session. So before you toss it out in melancholy, let us show you how you can spare the rest of your precious smoke.

How to Properly Put Out a Cigar for Later

The right way to extinguish a cigar is to allow it to rest in an ashtray until it stops smoking. There is no other correct way to put out a cigar that you want to continue smoking later.

After the cigar is cold and not smoking anymore, you should cut it off at the ash line or half an inch back to ensure it tastes fresh when you smoke it again. Not everyone does this, but we highly recommend following this step.

Next, you need to store the cigar properly. Place it in a Ziploc bag or an airtight container or buy plastic tubes made for this purpose. Store the cigar out of the sun in a temperature-controlled room.

It is best to smoke the cigar within 24 hours of storing. If you wait 48 hours or longer, it will likely taste stale and unpleasant. After 72 hours, you can almost guarantee the cigar won’t be good anymore.

Steps to Put Out a Cigar For Later

Below are the simplified steps of putting out a cigar so you can smoke it later. There is more nuance involved, which we will get to later.

What Not To Do

The steps to putting out a cigar for later are easy and simple. But, to help you avoid ruining the cigar, these are what you should not do when putting out a cigar. Keep these no-nos in mind so you don’t commit a cardinal sin in the cigar community.

Never, ever grind out your cigar like you would a cigarette. If you do not plan to save it you can do this, but doing so is considered poor cigar etiquette. Always let the cigar rest to extinguish it or gently roll the ash off to speed up the process.

Grinding a cigar will compromise the integrity of the roll and the wrapper. So when you come to enjoy the smoke for a second time, it may not hold up or burn properly.

Don’t leave the sticker label on the cigar when you extinguish it. The glue from the label will only continue to warm up and become gross and sticky. This step isn’t completely necessary, but it helps avoid an uncomfortable experience.

If you are done with your cigar or have been interrupted and need to put it out, do not just leave it smoking in the ashtray. This creates a fire hazard. Wait with your cigar until it has completely stopped smoking and gone cold.

If you must leave immediately, the only way to know you put it out completely is to dip the head in a glass of water. However, doing this means you will not be able to relight the cigar unless you immediately cut it, which could force the cigar to fall apart.

Although it’s a sad event to ruin half of a decent cigar, it is better than running the risk of the fire trucks pulling up an hour later.

Never return a half-smoked cigar to your humidor! The used taste and smell of the cigar could easily contaminate the other cigars in the humidor. The last thing you want is to taint your perfectly pristine cigars with your half-smoked straggler.

How to Properly Relight a Cigar

When you’re ready to relight your half-smoked cigar, there are some things to do before enjoying it again. The first thing we recommend is to clip the cigar about half an inch past the ash line. Cutting the cigar again will reduce the stale flavor from the ash of the previous smoking session.

When you extinguish a cigar, the smoke often billows and sits in the cigar, causing a build-up of tar and oils. This build-up often makes the cigar taste bad and stale. The smoke will also be harsher in your mouth, making for an overall unpleasant smoking experience. To avoid this, we recommend purging your cigar before smoking it again.

Purging is a simple process. Light the end of your cigar and wait for a bit of smoke to begin flowing. Take a big gulp of air and gently but firmly blow into your lit cigar until smoke comes out of the cigar head. You should do this up to three times before taking a proper puff of the cigar.

Once you do this, you can continue to enjoy the cigar normally, and the stale, unpleasant flavor should not be present.

Average Smoking Time of a Cigar

Cigars can burn anywhere from 45 minutes to almost two hours. Always try to start a cigar when you know you have at least one hour to enjoy it. While cigars can be extinguished and relit, it is best to enjoy them in one go for the optimal smoking experience.

The humidity in the air as well as how quickly or often you take puffs will also play a factor in how soon the cigar burns out.

Best Ashtrays For Putting Out a Cigar

Having the right ashtray makes it easier to safely and quickly extinguish your cigar. Ashtrays made for cigarettes or cigarillos will have a narrower resting spot, so make sure you get an ashtray made for cigars. Below are some of our best recommendations:

Like everything related to cigars, there are ways to do things. If you want the most out of every cigar, even the half-smoked ones, ensure you follow manufacturer guidelines and enthusiasts’ advice.

Keep this guide handy the next time you have to stop smoking mid-cigar and don’t want to waste the second half of your smoke!

For more information on tips and smoking your cigar the second time around, check out these commonly asked questions along with their answers.

Is it bad to smoke half a cigar and save the rest?

No, it’s not bad, but it isn’t ideal. If you can smoke a cigar all at once, this is the best way to enjoy one. But things happen, so there is no shame in putting it out for later rather than wasting the rest of the cigar.

What if the cigar doesn’t taste right the second time?

Sadly, sometimes cigars take on too much of a stale flavor when you put them out. If you purge the cigar and it still tastes funky, it may be time to call it quits and just light a new cigar. Don’t force yourself to smoke an unpleasant cigar, as they are supposed to be enjoyable and a nice treat, not a chore.

Can I cut the head off while the cigar is still smoking?

No, you must wait for the cigar to go out on its own. If you cut the end off, there is a chance the cigar has enough heat to relight, and it will also be more likely to taste stale.

Can I cut a cigar in half and smoke it?

Technically, yes. But we advise against doing this. Cutting the cigar in half can ruin the flavor and complexity of the smoke. Depending on which half you get, you may not enjoy how the end feels in your mouth because it isn’t the right end to be smoking.

If you don’t want a whole cigar, this is an option. But most cigar enthusiasts would consider this a hindrance to the pleasure of the cigar.